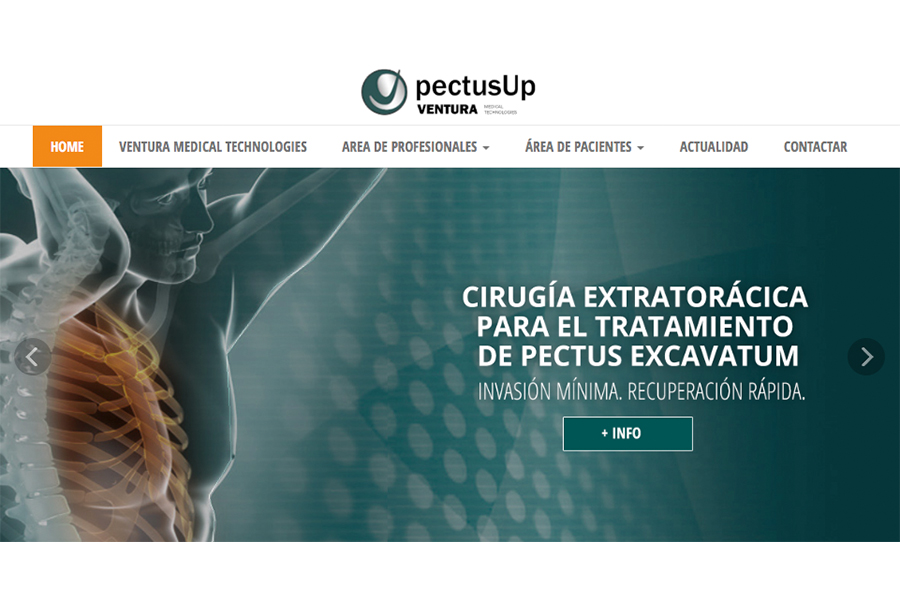 The company Ventura Medical Technologies presents the website of its most innovative product, the Pectus Surgery Up Kit, an implant for the Pectus Excavatum treatment, the most frequent congenital malformation of the chest in children and adolescents.

The purpose of this site is to become a reference point for disclosure, reflection, exchange of knowledge and debate about Pectus Excavatum. The disease is characterized by a depression of the sternum which gives a sunken appearance to the chest, also known as funnel chest.

The malformation is diagnosed in children and develops gradually during puberty. It is estimated that this thoracic malformation occurs in about 1 in every 800-1000 births and generally is more common in males.

In a society like today, dominated by communication technology and information, it is imperative that all of those innovative initiatives designed to benefit the whole society, are disclosed, which can diffuse its benefits and can be extended around the world.

Thus, the new website has two main thematic blocks: one for patients and one for professionals. The digital portal will work to report all kinds of information, advice and interesting aspects related to the Pectus Excavatum.

The birth of the project must be placed in the company BVentura, manufacturer of precision components in the automotive sector, with facilities in Les Franqueses del Valles, United States and China.

Its firm position in favor of innovation and cutting edge technology, along with the willingness to commit with society, led to open a new business line in 2010 oriented to the health sector: Ventura Medical Technologies.

Thus, Ventura Medical Technologies was born to develop new medical technologies with the will to benefit the maximum number of patients, and its first project was to solve the pectus excavatum in an ingenious way.

With an innovative and cutting-edge solution, Ventura MT has made significant progress towards more effective, faster and less painful solution until then, and now works to raise awareness of these developments among the major stakeholders in the health sector and people affected by this thoracic malformation.