NEW PECTUS UP REFRESHER COURSE IN THORACIC SURGERY IN MADRID 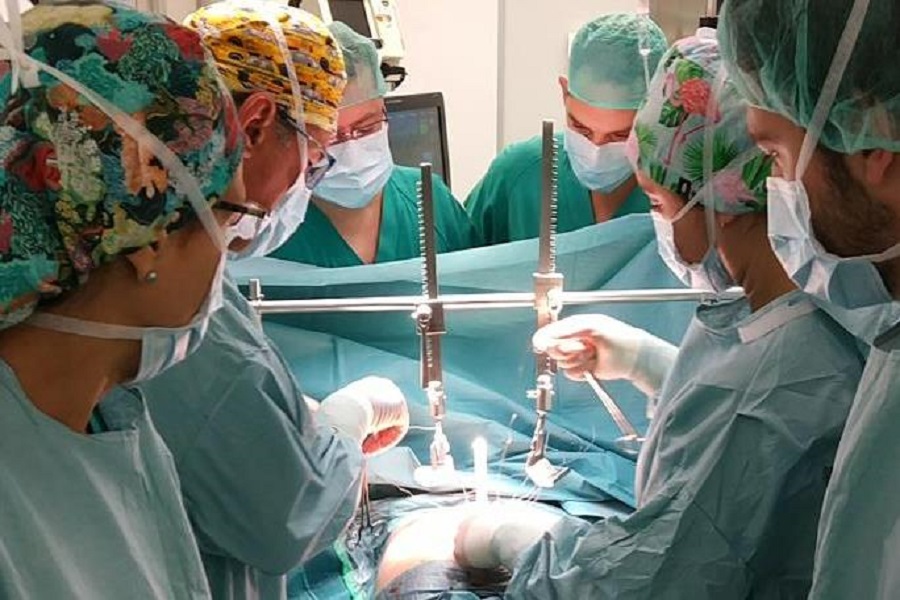 Dr. Andrés Varela performs a Pectus Up surgery in a refresher course in thoracic surgery held at the Hospital Puerta de Hierro Majadahonda.

Last 22nd and 23rd November, a live surgery with Pectus Up took place during a refresher course in thoracic surgery that was held at the Hospital Puerta de Hierro Majadahonda, in Madrid (Spain), in cooperation with Ventura Medical Technologies.

Dr. Andrés Varela was in charge of the organization of the course, which included presentations, discussion and clinical cases, introduced by himself and by the rest of the hospital’s thoracic surgery team’s members. The course was attended by several surgeons from different hospitals of Spain, such as Hospital Virgen Macarena and Hospital Virgen del Rocío in Seville; Fundación Jiménez Díaz and Hospital La Paz in Madrid; and Hospital La Candelaria in Tenerife.

Dr. Varela is Head of Service of the Hospital Puerta de Hierro, of the Hospital Quirónsalud Madrid and of the Hospital La Luz, all of them in Madrid, Spain.  He has 30 years of professional and research experience, mainly in the field of oncological thoracic surgery and lung transplantation, with more than 100 cases in the last three years.

In the last two years, Dr. Varela has performed 13 Pectus Up surgeries, thus becoming a reference in the training of surgeons, both thoracic and pediatric, in this new minimally invasive technique.  More than 25 surgeons of national and international scope have taken part in these operations.

In addition, thanks to his collaboration and the improvements in the technique, the age range of the operated people has been extended, the last one being a 46-year-old patient, which increases the number of corrections in cases of asymmetric Pectus Excavatum.

The Pectus Up has well-defined and standardized criteria allowing a good replication of the technique through an extrathoracic approach, which entails very little postoperative pain and a short recovery period.