DR. MOLINS IMPLEMENTS A NEW VERSION OF THE SURGICAL PROCEDURE WITH PECTUS UP SURGERY KIT

Home » DR. MOLINS IMPLEMENTS A NEW VERSION OF THE SURGICAL PROCEDURE WITH PECTUS UP SURGERY KIT

Hospital de Barcelona was the setting chosen to operate on a patient affected by Pectus Excavatum with the Pectus Up, by combining this new surgical procedure with Ravitch technique.

The intervention was performed by Dr. Laureano Molins and Dr. Jorge Hernández, from the Thoracic Surgery Service at University Hospital Sagrat Cor of Barcelona.

Dr. Laureano Molins is the head of service in this hospital and in Hospital Clínic de Barcelona. He was trained in thoracic surgery at Clinica Mayo, Rochester, Minnesota and Massachusetts, General Hospital and New England Deaconess Hospital (Harvard Medical School) in Boston, Massachusetts (USA). He is a founder member of the European Society of Thoracic Surgeons, Professor of the European School of Thoracic Surgery and Associate Professor of Surgery in the University of Barcelona, as well as member of the Royal European Academy of Doctors.

The patient was operated on in Hospital de Barcelona, since he is covered by the social security in Andorra, having an agreement with the mutual insurance Assistència Sanitària. This hospital is a SCIAS center (Instal·lacions Assistencials Sanitàries) inaugurated in 1990 in Barcelona, as a non-profit seeking center, facilitating along the healthcare professional cooperative a continuous relationship with patients, with no intermediaries.

For the first time in a surgery, Pectus Up technique has been combined with a partial removal of some costal cartilage (Ravitch procedure) in an adult patient affected by Pectus Excavatum with high asymmetry level and chest stiffness.

This technique consists of the costal cartilage removal in a bilateral way along the entire deformity length, one or more transverse incisions in the sternum to alter its configuration and the implantation of some prosthetic support to fix the needed position for good.

This time, the new Pectus Up implant developed by Ventura Medical Technologies was placed. This implant remains temporarily in the sternum, for three or four years as per surgeons criterion, the same as in the conventional surgeries with this device.

Ravitch technique is a surgery providing good results at the expense of a significant aggressiveness, but with this intervention, good results will be kept thanks to both technique combination and a much less invasive approach. 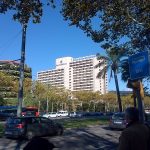